The term ‘multilevel’ refers to a hierarchical or nested data structure, usually subjects within organizational groups, but the nesting may also consist of repeated measures within subjects, or respondents within clusters, as in cluster sampling. The expression multilevel model is used as a generic term for all models for nested data. Multilevel analysis is used to examine relations between variables measured at different levels of the multilevel data structure. This book presents two types of multilevel models in detail: the multilevel regression model and the multilevel structural equation model. Although multilevel analysis is used in many research fields, the examples in this book are mainly from the social and behavioral sciences. In the past decades, multilevel analysis software has become available that is both powerful and accessible, either as special packages or as part of a general software package. In addition, several handbooks have been published, including the earlier editions of this book. The view of ‘multilevel analysis’ applying to individuals nested within groups has changed to a view that multilevel models and analysis software offer a very flexible way to model complex data. Thus, multilevel modeling has contributed to the analysis of traditional individuals within groups data, repeated measures and longitudinal data, sociometric modeling, twin studies, meta-analysis and analysis of cluster randomized trials. This book treats two classes of multilevel models: multilevel regression models, and multilevel structural equation models (MSEM).  A tutorial on how to do a multilevel analysis with cross-level interaction in HLM has now also been uploaded here.

Conceptually, it is useful to view the multilevel regression model as a hierarchical system of regression equations. For example, assume that we have data from J classes, with a different number of pupils nj in each class. On the pupil level, we have the outcome variable ‘popularity’ (Y), measured by a self-rating scale that ranges from 0 (very unpopular) to 10 (very popular). We have two explanatory variables on the pupil level: pupil gender (X1: 0=boy, 1=girl) and pupil extraversion (X2, measured on a selfrating scale ranging from 1–10), and one class level explanatory variable teacher experience (Z: in years, ranging from 2–25). There are data on 2000 pupils in 100 classes, so the average class size is 20 pupils.  To analyze these data, we can set up separate regression equations in each class to predict the outcome variable Y using the explanatory variables X as follows: 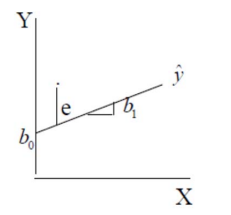 The figure to the right presents an example with two groups. The panel on the left portrays two groups with no slope variation, and as a result the two slopes are parallel. The intercepts for both groups are  different. The panel on the right portrays two groups with different slopes, or slope variation. Note that variation in slopes also has an effect on the difference between the intercepts!  Across all classes, the regression coefficients β0j, … β2j are assumed to have a multivariate normal distribution. The next step in the hierarchical regression model is to explain the variation of the regression coefficients β0j, … β2j  by introducing explanatory variables at the class level, for the intercept:

and for the slopes:

Our model with two pupil level and one class level explanatory variables can be written as a single complex regression equation by substituting equations 2.3 and 2.4 into equation 2.1. Substitution and rearranging terms gives:

For a more thorough introduction and some useful examples please read the second chapter of the book on ‘Basic Two-Level Regression Model’  which can be downloaded here.